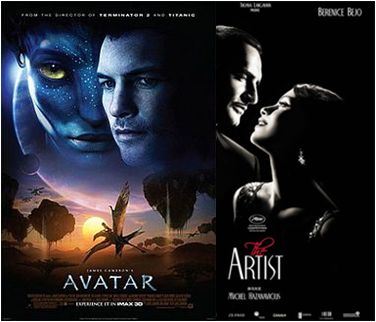 Can movies innovate with only seven stories to tell?

How innovative are movies really – if at all?  While AVATAR and THE ARTIST appear to be polar opposites, they share a similar story, so where is the innovation?

Following my passion, I happened to visit the ‘Berlinale’, the international film festival in Berlin/Germany last week:  Over 20,000 accredited participants from around the world share their professional passion and trade movies in one of the world’s biggest market places for films.

In midst the bustle, I couldn’t stop my mind from wandering off and asking myself this question:

Is a movie an innovation?

Each film is an entrepreneurial venture, a financial and personal risk that filmmakers take and often sacrifice years of their lives for.  As the audience, we enjoy to immerse in ever-new stories and characters to touches our minds and emotions.

However, is a movie really an innovation?  One can argue.

The generic definition of innovation from the “What does it take to keep innovating? (part 1 of 3)” post states: “innovation is different from a novelty: it is the combination that translates a novelty into a marketable product (or service), so an innovation brings together the newness, the value it creates and the adoption to something marketable”.

Therefore, also a movie would have to demonstrate these same three requirements in order to be innovative.  So let us look for a match along the lines of:

Seven stories to rule the world

First, is a film a novelty?  Of course, you may think.  Every film is new and different, even a re-make!

What I find interesting though is that many experts agree there are “seven stories that rule the world” as Matt Haig lays it out.  It means that there are only seven plots, which are being re-told in different ways over and over again.  ‑ How can this be innovative?

AVATAR, for example, took 3D cinema to a new technological level and colorful experience for the audience just a few years back.  James Cameron made this movie “with the intention of pushing the boundaries of what was possible with cinematic digital effects (…) blending live-action sequences and digitally captured performances in a three-dimensional, computer-generated world.”  (Read more: James Cameron’s Avatar – 3D and CG Movie Technology With Avatar – Popular Mechanics)

The humongous $500 million total investment was a huge risk to take but the gamble of this big Hollywood production worked out:  AVATAR broke the sales record (formerly held by TITANIC) by earning nearly $2 billion within 39 days at the box-office.  Not a bad 1:4 return of investment (ROI) ratio!

Looking at our definition for innovation, AVATAR meets all three requirements by inventing new technology and processes for an enhanced viewing experience and by meeting an audience demand as we proven by its commercial success.  It is not surprising to see the sequels AVATAR 2 and AVATAR 3 already on their way.

Nonetheless, the AVATAR story is based on the ancient ‘rebirth’ plot of the protagonist and put little emphasis on artistic performance of its characters.

Now look at the ongoing award season:  THE ARTIST keeps racking up one trophy after another.  Both movies, AVATAR and THE ARTIST could not be more different:  THE ARTIST comes in black-and-white and is a silent movie from France!

Neither the story line of an artist’s comeback (yes, it’s the ‘rebirth’ plot again, just like in AVATAR) nor the century-old cinematic format bears any news.  Is this really an innovative movie?  One can argue.

Let’s look at value creation and value capture first; this is an easy one:  The commercial value of THE ARTIST reflects $60 million or so in box-office sales the last time I checked.  It draws crowds of paying audience and proves to be a very successful production (with the same 1:4 ROI return ratio as AVATAR) on the original $15 million investment!  It is also the runaway winner converting nominations into awards internationally.  Check.

Certainly, producing a silent movie for theatrical release these days is an enormous risk and considered unthinkable before THE ARTIST came along.  In fact, it came at a high risk for the filmmaker, Michel Hazanavicius.  He was not even taken serious and was laughed at when he presented his idea to raise funds for the project.  It looks like a hopeless project from the Stone Age compared to AVATAR!

Let’s face it; movies have become a commodity that is available anytime and anywhere and on every gadget like smart-phones or gaming consoles.  As mass-marketed products, movies often don’t even make it to the theater screen anymore; instead, they go directly on DVD or on-demand channels with only little returns for the filmmaker and investors.

What is new about an old concept?

With THE ARTIST, we have a movie that follows a plot line known for centuries and shot in the old-school and boxy 1.33 celluloid format about as old as the movie industry itself.  Yet it became a smash success overnight as the first theatrical silent movie release in 35 years.  Remember Mel Brooks’ SILENT MOVIE comedy in 1976?  ‑ Something must be different!  What has happened?

What it comes down to is the question whether a black-and-white and silent move has innovative potential in the ‘novelty’ category.

THE ARTIST gave ‘rebirth’ to this narrow and thought-dead category of silent black-and-white movies at a time where technology over-kill ruled the house!  THE ARTIST brought back the glamor of the old Hollywood to present day:  A glitzy world of the famous and the beautiful, celluloid dreams on the silver screen.  It reminds us that movies can be special and not just a commodity.

Thus, the plot may not be new, but the way it is presented can very well be original.  This is where we find the novelty of innovation or, as Matt Haig puts it: “It comes from style and voice and the imagination that brings language and characters and settings to life (…) It’s how you carry these universal plots into the present age that’s the challenge.”

It is not the plot alone that attracts the audience but the unique way to tell a story with high artistic quality and at the right time, when the audience matured and is ready for it.  THE ARTIST re-discovered the glamor, elegance and artistic focus that seemed lost and brought it back to life.  It answers to the silent yearning of its audience and lets us feel the magic of movies once again.

No matter if you agree or disagree with me that movies can be innovations, if you have not seen THE ARTIST yet, watch it and enjoy.  It is just magical and delightful like movies are meant to be!

2 thoughts on “Can movies innovate with only seven stories to tell?”